As a model and TV star, it’s no surprise that Kim Kardashian’s images are sometimes edited, but it is surprising that after all these years she’s still making Photoshop fails.

Okay, okay, Kim probably doesn’t sit in front of Adobe Creative Suite all day making the changes herself, but I’m sure she has control over what appears on her Instagram, so she’s still somewhat to blame.

While the rest of us have been bingeing Netflix and baking endless banana breads in quarantine, the Keeping Up With The Kardashians star has apparently been rifling through the costume box and partaking in some photoshoots (unlike her sister who has been busying recreating classic moments of the show on TikTok).

Yesterday, May 4, Kim took to Instagram to share some sultry pictures of herself dressed as some kind of human-snake hybrid, wearing a snakeskin bandeau and a matching wrap to cover her bum.

The most impressive part of the look was Kim’s hair, which had been made to look as if it had a snakeskin pattern of its own.

Now, unless the Kardashians’ hairdressers have developed with some very impressive hair-dying skills over the past few weeks, it’s safe to assume the pattern is edited on to Kim’s head. 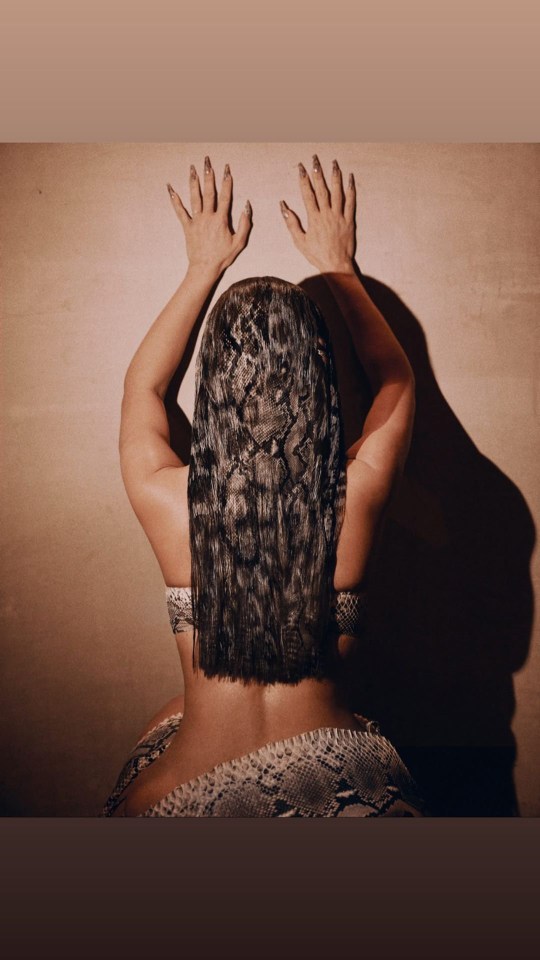 However, if getting snakeskin hair was possible through intricate salon skills – which it might be, I’m not exactly an expert – Kim’s hair could definitely pass for real, as the pattern blends well with her hair.

Unfortunately, though, there was one, teensy-tiny detail that made the Photoshop-shaped elephant in the room impossible to ignore; in this post, Kim has three hands.

I’ll admit, I didn’t spot the blunder at first, but once you’ve seen it it’s almost impossible to ignore. On the right side of Kim’s head, around where her ear would be, it’s possible to see a couple of well-manicured fingers poking through her hair.

Check it out here:

Kim Kardashian has third hand in photoshop failKim Kardashian/Instagram
The hand-in-hair pose isn’t an uncommon one, but considering Kim already has two hands placed on the wall, it’s obviously a mistake.

We can only assume that Kim took a range of pictures during this shoot, and perhaps she believed her body looked better on one image while her hands looked better in another, so she decided to use the best of both. All we know for sure is that whoever is behind the edits forgot to remove Kim’s fingers from her hair when they created the final image.

Instagram users were quick to point out the Insta-fail, with one writing:

Why there fingers in your hair, you got three arms?

Ma’am why’s there a finger in your hair omg.

Kim doesn’t appear to have responded to the comments at the time of writing, May 5, though she has been active on Instagram since, so it’s possible she’s just decided to live with the mistake.

I’m sure fans will be keeping a beady eye out for any more Photoshop fails in future, though Kim still slays in every post, so I don’t think she’ll be too bothered about the odd third hand.