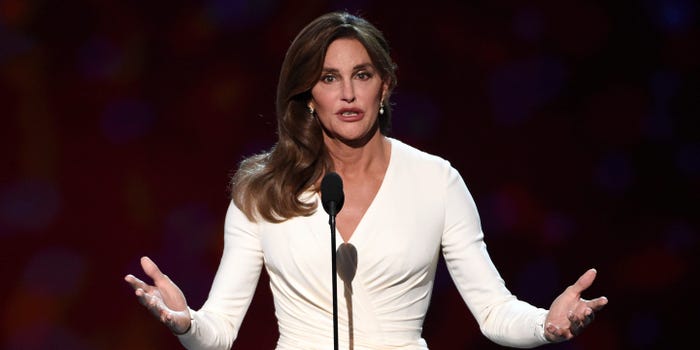 Caitlyn Jenner, a candidate for California governor, said in an interview Saturday that she did not believe transgender girls should be allowed to participate in girls’ sports.

Jenner, a Republican who came out publicly as a trans woman in 2015, made the comments in a seemingly impromptu interview with TMZ as she walking out of a Starbucks with her dog.

“This is a question of fairness,” said Jenner, who in 1976 won gold at the Olympics. “That’s why I oppose biological boys who are trans competing in girls’ sports in school. It just isn’t fair. And we have to protect girls’ sports in our schools.”

Read more: With at least 36 bills and a new law, Republicans across the country ramp up attacks on transgender athletes’ rights. ‘None of this was ever about fairness.’

Jenner declined to answer a follow-up question when the reporter asked whether it was “delegitimizing” to a trans person’s identity to refuse to allow them to play on the sports team that aligns with their gender.

“Have a good day,” Jenner said.

“I didn’t expect to get asked this on my Saturday morning coffee run, but I’m clear about where I stand,” Jenner later said in a tweet, sharing the TMZ interview. “It’s an issue of fairness and we need to protect girls’ sports in our schools.”

There are bills targeting transgender people in at least 28 state legislatures in the US across the country, Insider’s Canela López previously reported. These types of legislation range from banning trans children from playing on sports teams to prohibiting doctors from providing medical care to trans youth.

There are at least 36 bills in state legislatures specifically targeting transgender youth from playing on teams matching their gender identity, Insider’s Madison Hall and Kayla Epstein reported. The Florida legislature on Friday passed a law prohibiting trans youth from participating in school sports that align with their gender.

Jenner’s view pits her against many activists in the transgender community, who argue that bills prohibiting trans kids from participating on sports teams that align with their gender identity are harmful and unnecessary.

“Trans youth are just trying to go to school to learn and play on a team to be with their friends like anybody else,” Rodrigo Heng-Lehtinen, deputy executive director of the National Center for Transgender Equality, previously told Insider. “There’s no reason that elected officials should be attacking young people like that. We should be making it easier to be in school and play on teams these days, not harder.”

While conservative lawmakers have focused on bills targeting trans athletes, lawmakers often are unable to identify instances where the inclusion of trans girls on a girls sports team has resulted in any sort of a problem, as the Associated Press reported.