Internet users upload millions of photos every day. Different photos make people feel certain ways but pictures that evoke strong emotions often go viral. Everyone likes and shares these pictures but not everyone takes the time to read the comments. If they did, they’d learn that some of the photos are actually fake.

At Bright Side, we agree that it’s not always easy to recognize a fake photo, especially when a photo is real but the story behind it is fake. Here are 9 popular photos we shouldn’t have believed right off the bat.

1. Here’s what happened to a rainforest over 10 years. 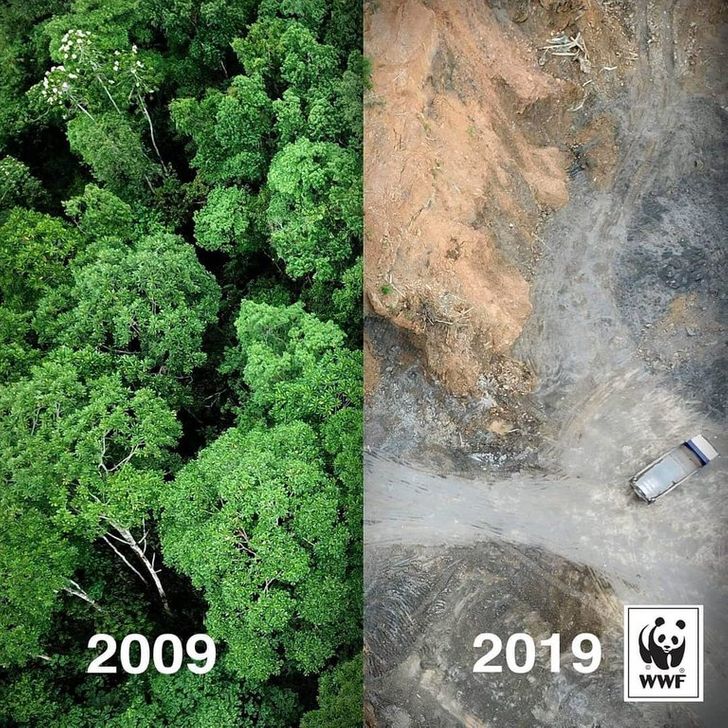 © kinkysatanx / reddit
This photo collage became a hit thanks to the popular #10YearChallenge. On Reddit, this picture is accompanied by text that says that every year, 46,000 to 58,000 square miles of forest are lost to deforestation. The photo looks real especially because of the logo in the right corner. But in fact, this is not a collage of 2 pictures taken 10 years apart, it is one picture from a photo stock. It shows Malasia where the rainforest was removed to increase the territory for growing palm trees. 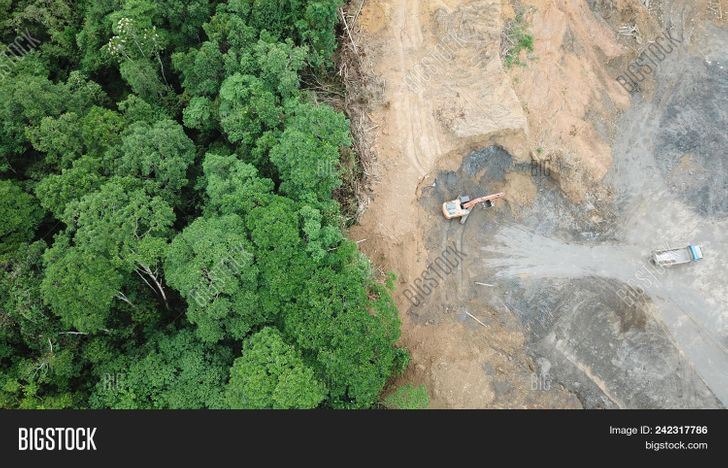 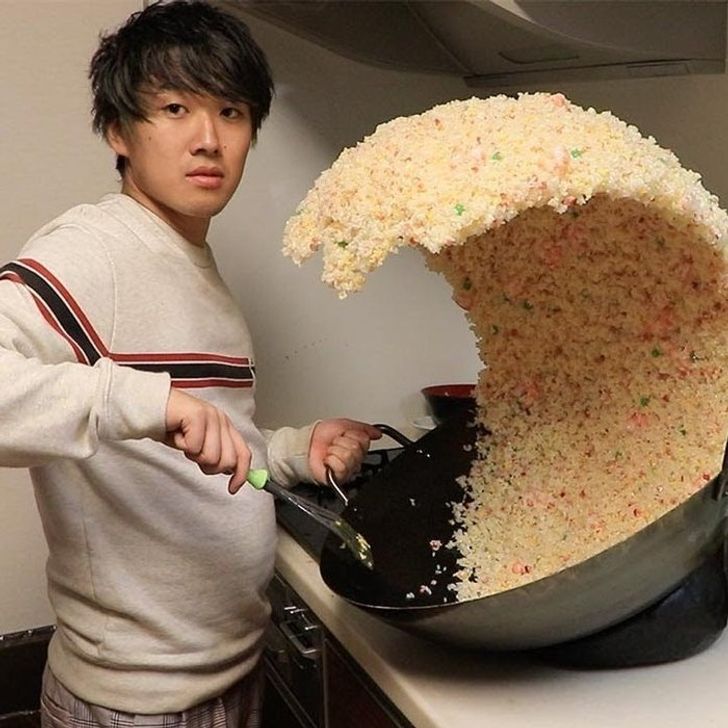 Did you also think a photographer managed to capture this awesome rice-flipping moment? Well, the rice is actually fake. In fact, everything is fake. It’s simply a sculpture that you can buy in a shop in Tokyo where fake foods are sold. 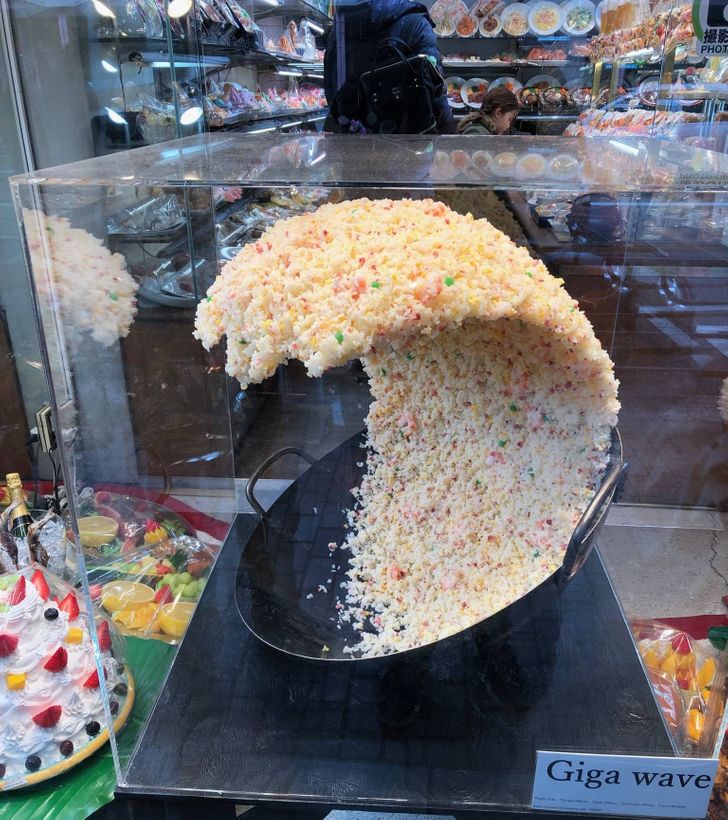 © BobertMcGee / reddit
3. Graffiti you can only see in the water 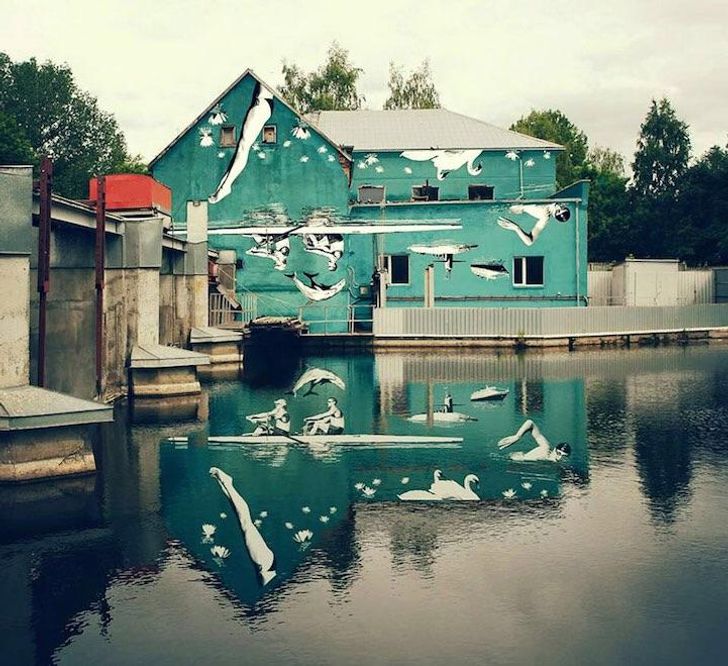 © Bonnie817 / reddit
This photo became a hit on many websites. But the truth is, it was edited. Yes, this graffiti really exists and the building is located in Mariampol, Lithuania. And the author of the picture is a street artist named Ray Bartkus who drew the picture upside-down on purpose — for it to be reflected in the water. But the best time to see the picture is when there is no wind and the surface is perfectly smooth. Otherwise, the picture looks like this: 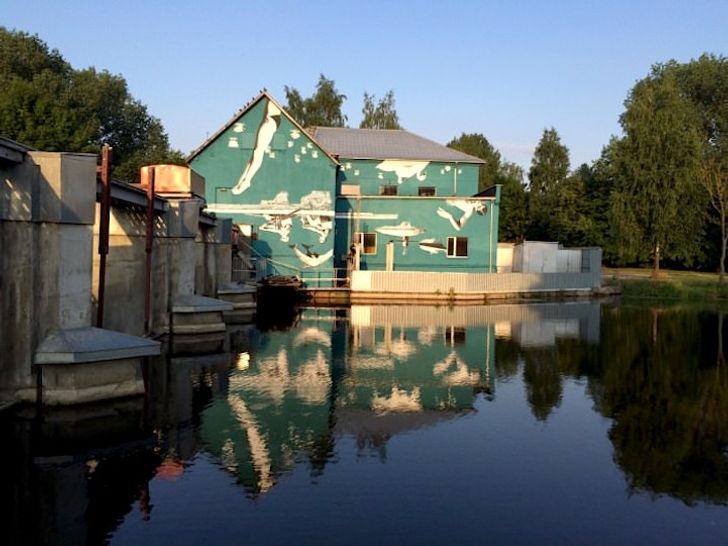 © GoGoGadgetReddit / reddit
See how the reflection in the first photograph was edited?

4. A lynx and a deer were found in an office under a table. They were hiding from fires in California. 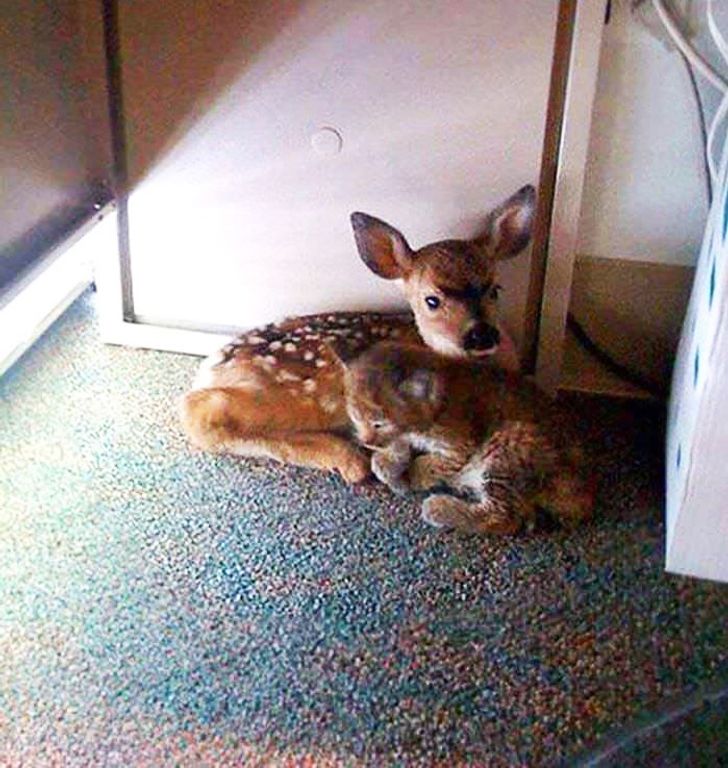 © junkyardmessiah / reddit
“A fawn and a bobcat cub found under a desk in an office building after the California forest fire rolled through” is what the caption for the viral photo said on Reddit, Twitter, and other social media sites. Yes, the photo is real but it’s posted every time a forest fire breaks out somewhere in the US. And the caption is different every time. The picture was taken in May 2009 in a building that is owned by a non-commercial team of animal rescuers. During a fire in Santa Barbara, California, these cute animals were found not far from Arnold Schwarzenegger’s ranch. And because there were no cages, the fawn and the lynx had to be put in an office. The lynx just ran toward the deer and lied down next to it.

By the way, one of the rescuers took the animals home because he was worried they would not survive in the wild. Later, he even shared a video with the grown-up lynx — he turned out to be very cute!

5. The New Year in Paris 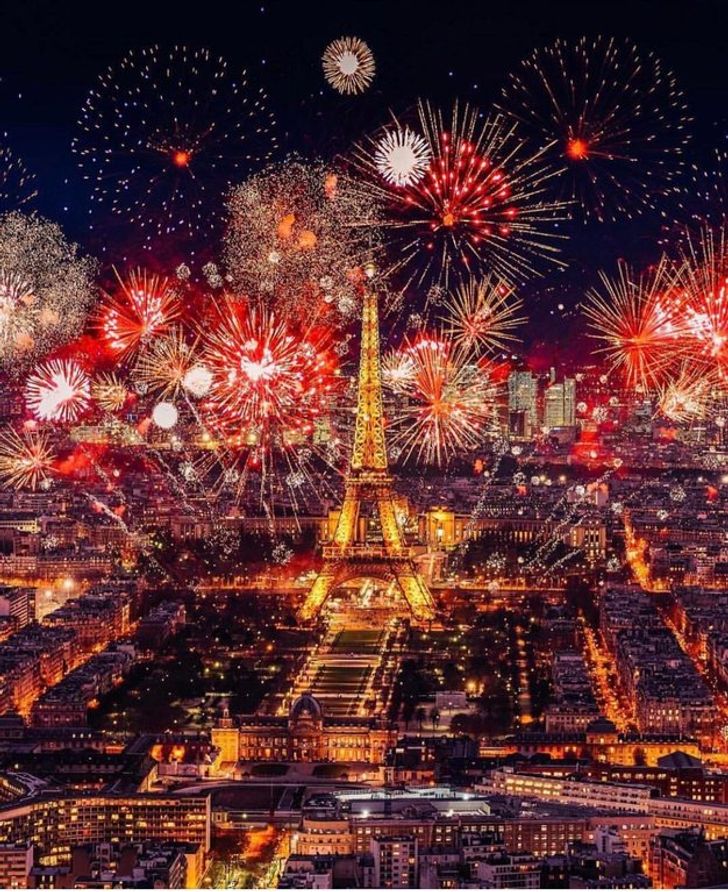 © britainunwrapped / reddit
This popular picture shows hundreds of fireworks that were supposedly launched in Paris on New Year’s Eve. Unfortunately, the photo is fake and we found several pieces of evidence. First of all, on New Year’s Eve, the fireworks are launched from the Eiffel Tower. Secondly, all the fireworks in the photo are at the same distance from the camera. And finally, the Internet users who live in Paris claim that this is a fake picture. Just take a look at the picture of the real fireworks show above the Eiffel Tower on July 14. 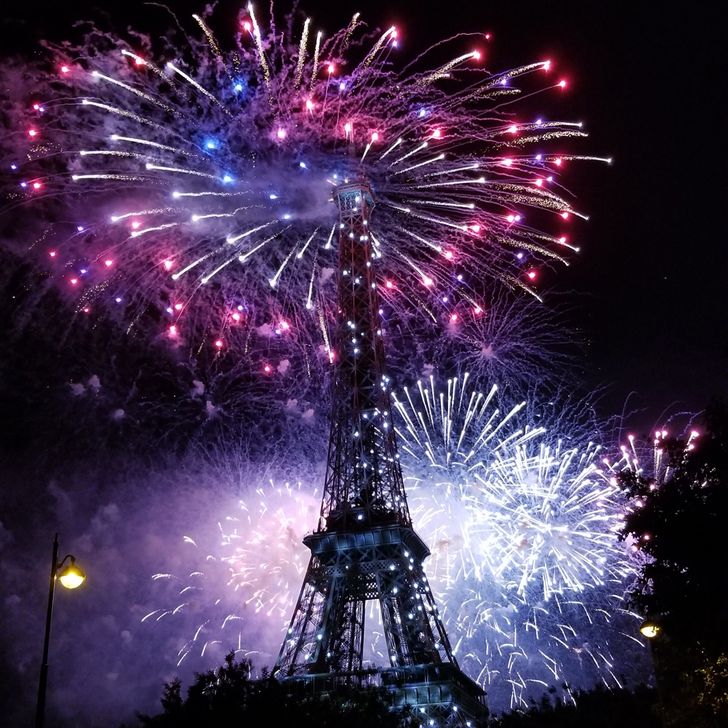 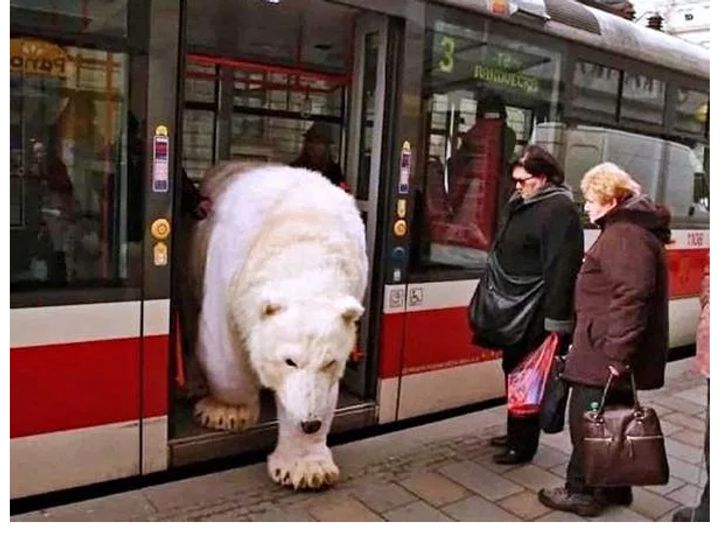 © Moaml99 / reddit
You can see this photo with a similar title (for example, “Polar Express”) on the Internet. It is said that the photo shows a real white bear getting off the tram somewhere in Russia. You’d be surprised but the photo is absolutely real — it was taken in a town in the Czech Republic and it wasn’t edited. But the bear is not real — it’s a costume that 2 Greenpeace activists were wearing. This “bear” was a part of the campaign, Save the Arctic. It “walked” in European cities to attract attention to the problems in the Arctic.

7. A goose frozen to a pipe warmed a puppy with its wing. 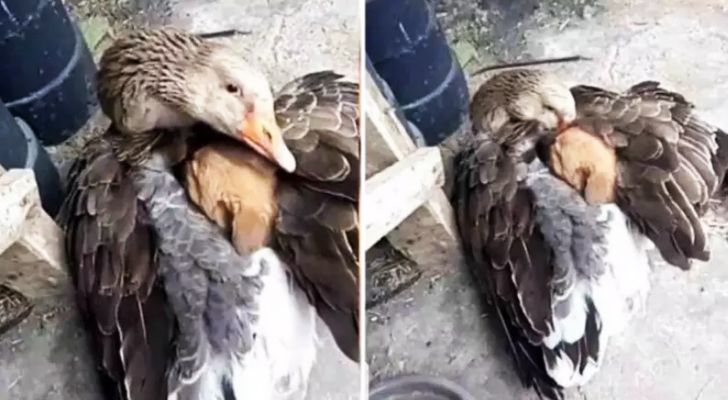 © Suzanne PadaPetra / facebook
At the end of January, hundreds of thousands of people on social media liked and shared the photo of a shivering goose that froze to a pipe and was warming a puppy with its wings. Allegedly, they were found in Montana. Even though the photo seems to be real, it was taken a very long time ago and most likely, it wasn’t in the US. And on top of all that, the story itself is most likely a lie. These pictures have been shared on Chinese websites since 2017. The earliest post we were able to find was made in March 2017 on NetEase — it’s is a Chinese news platform. The text under these photos says that the puppy was sitting at the side of the road, freezing. Ducks were passing by and the puppy ran toward one of them and it covered it with its wing. NetEase actually allows users to post their own content. So that means that they give their own description to the photos and there is no way to find out if the photo is real or not.

8. A megalodon’s tooth in a whale vertebrae 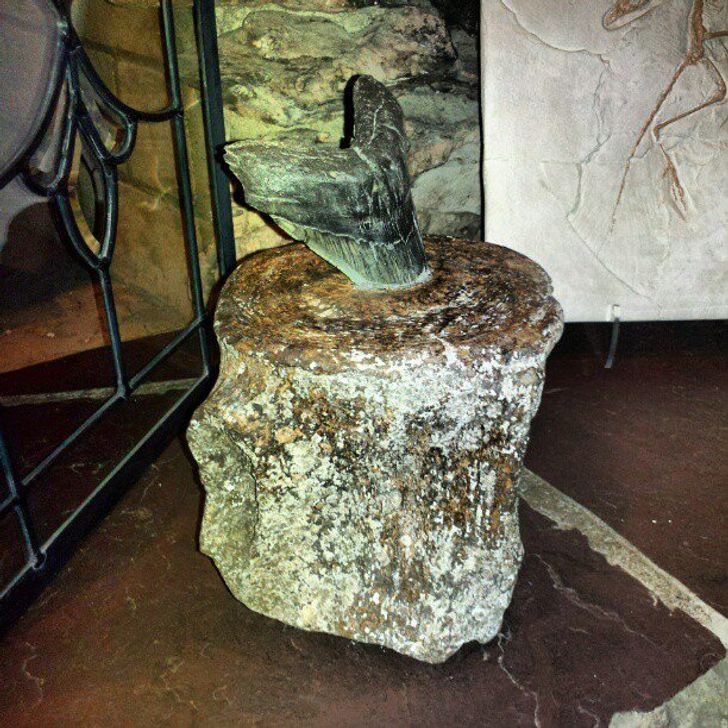 © GallowBoob / reddit
The photo above shows fossils that look like a megalodon’s tooth and a whale’s bone but they were found in different places at different times. But one talented seller just combined them into one sculpture. This is what the owner of the artifact said about it. And if this were a real megalodon’s tooth stuck in a whale’s vertebrae, it would cost millions of dollars and would most likely be in an archaeological museum.

9. A cruise ship dumping waste into the sea

The caption to this photo that was published on Facebook not long ago says that this cruise ship is dumping waste right into the sea. This post went viral and users started leaving bad comments and even the national director on the environment of Uruguay had to provide an explanation. In his Twitter account, he wrote that this photo shows the cruise ship starting its turbines in order to drop an anchor. And the brown spots are the sand and the sludge from the bottom.

Would you believe any of these photos if you just saw them online? What photos have you been fooled by before?