Have you ever had that feeling where you think, “Christ, I wish I could go back to just before that ball hit me in the face and move out of the way?” Maybe it wasn’t a ball, perhaps you fell over in public, or dropped a giant pan of paella that your family had been tirelessly working on all day and had to suffer the embarrassment? Either way, everyone has experienced that feeling of wishing they could return to that moment just before the goof occurred and set things right.

Well, with that in mind, strap in and don your star-shaped goggles of procrastination, as I present you with some hilarious pictures that give you a glimpse of the moment just before disaster occurred!

1. Before The Pain Hits 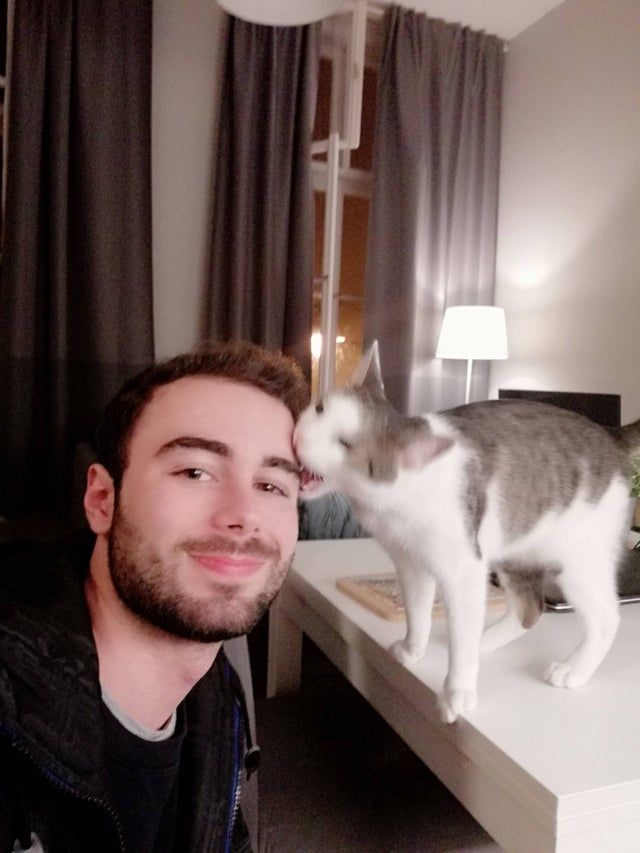 Reddit | Kurpool
This guys is still living in the moment where his cat is very much his best friend. Look at the innocence in his face. This is a tale of love, trust, and betrayal.

2. “Still my favorite picture of me and my brother, my grandpa caught the moment before my tears perfectly” 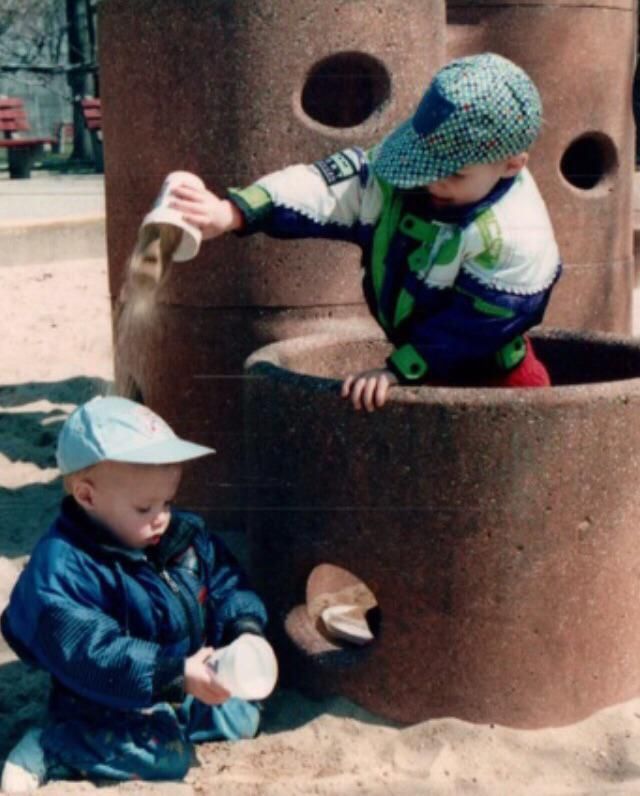 Reddit | csnk
I don’t have any siblings, so I just had to make do pouring sand onto the head of my imaginary friend Craig who was really into Jamiroquai. Melancholy, yet creepy, violin music starts playing

3. “This has disaster written all over it.” 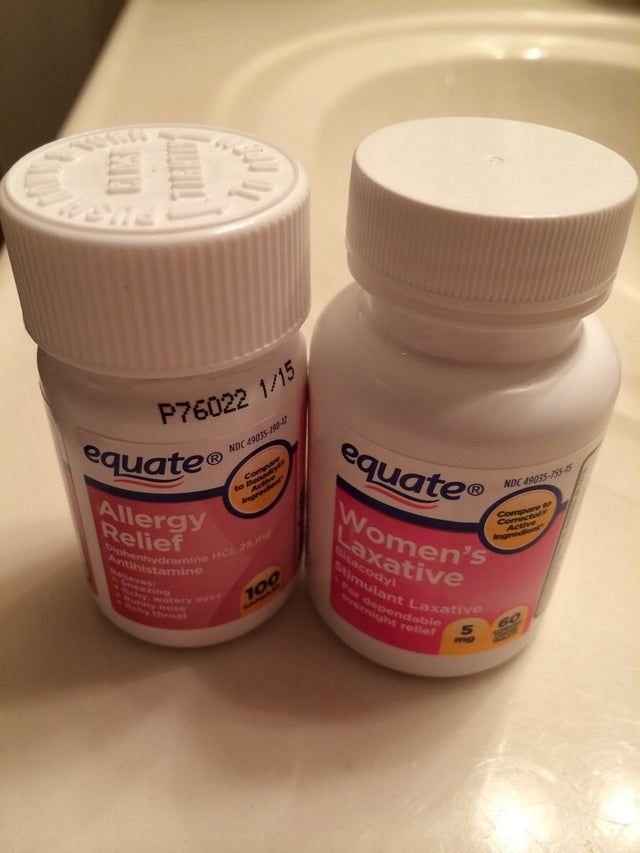 Reddit | edness81
The person who makes the labels for this company just wants to watch the world burn.

Oh, also, what makes “women’s laxatives” specific to women? Seriously, if anyone knows let me know because I’m genuinely curious! Apparently I have nothing better to think about either.

4. “Mid-air struggle behind the newly wed.” 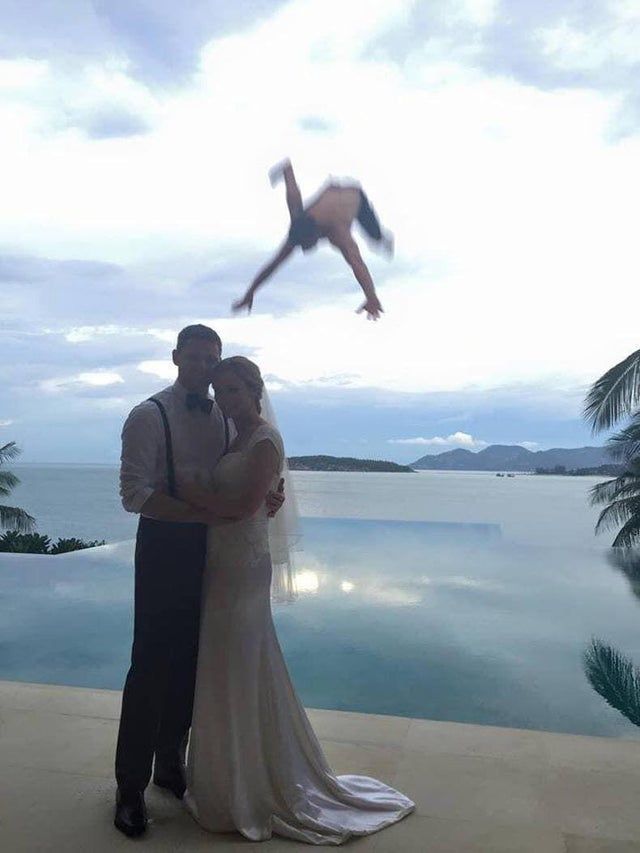 Reddit | TheSANEG
Now that is one way to crash a wedding, just flying through the air professing your undying love for the bride and praying that she’ll not be mad you soaked her wedding dress. 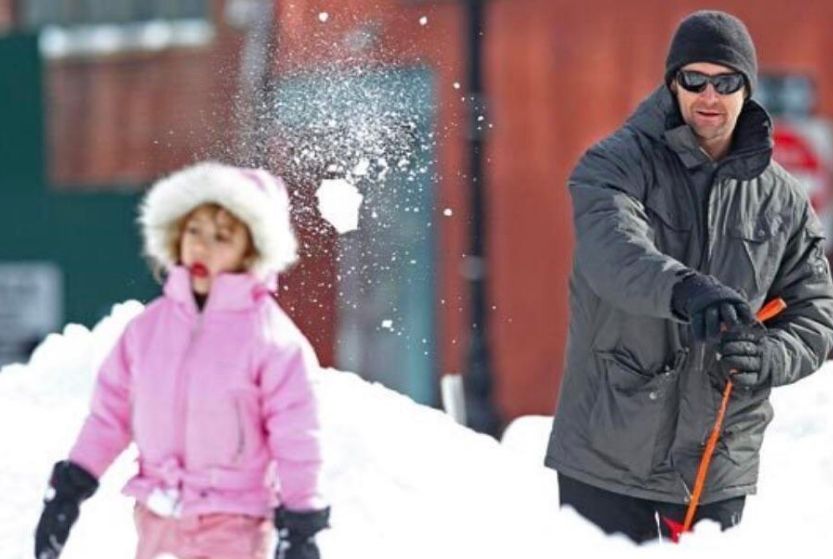 Reddit | gmcl86
Ah, the only reason why people have children, to occasionally torture the little freeloaders! Good to see most celebrities are just like normal people as well! I’d like to see Gwyneth Paltrow do something like this though, “Is that a Goop snowball? If not put it the hell down!” 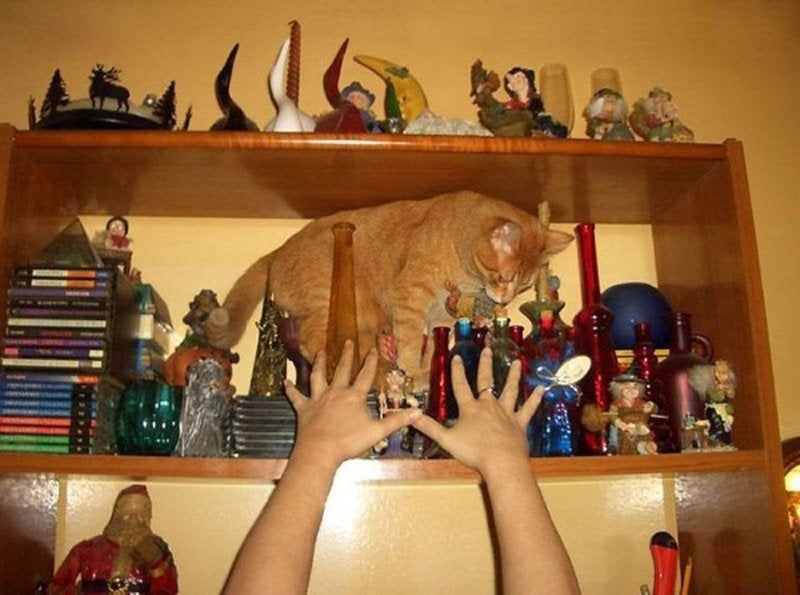 Reddit | Valens
Look, if you’ve got a cat, why did you think that putting so much glass in such a confined space, and so high off the ground, would be a good idea? Even the cat has that expression of, “Well, Mark, if you’d have thought about this, we wouldn’t find ourselves in this mess would we?” 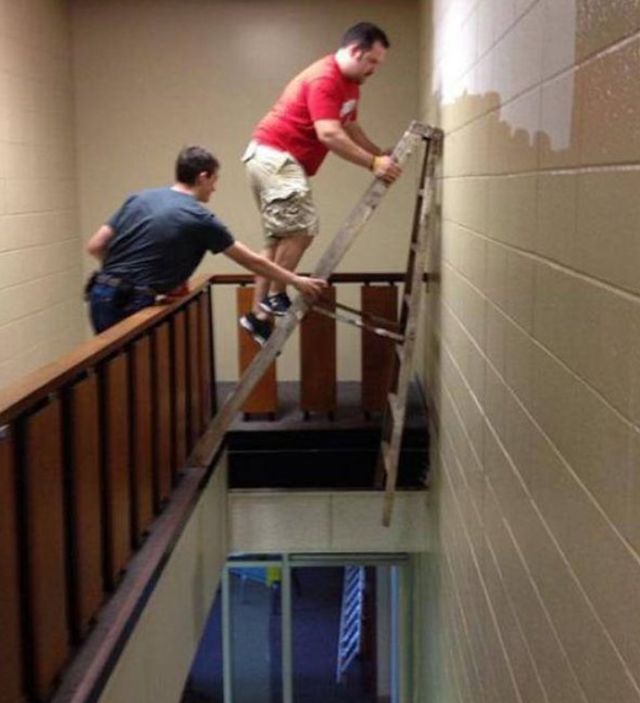 Reddit | Withyourfeetintheair
But, where is he going to? There’s nothing up there!

8. “Taken before the biggest food fight at my hs” 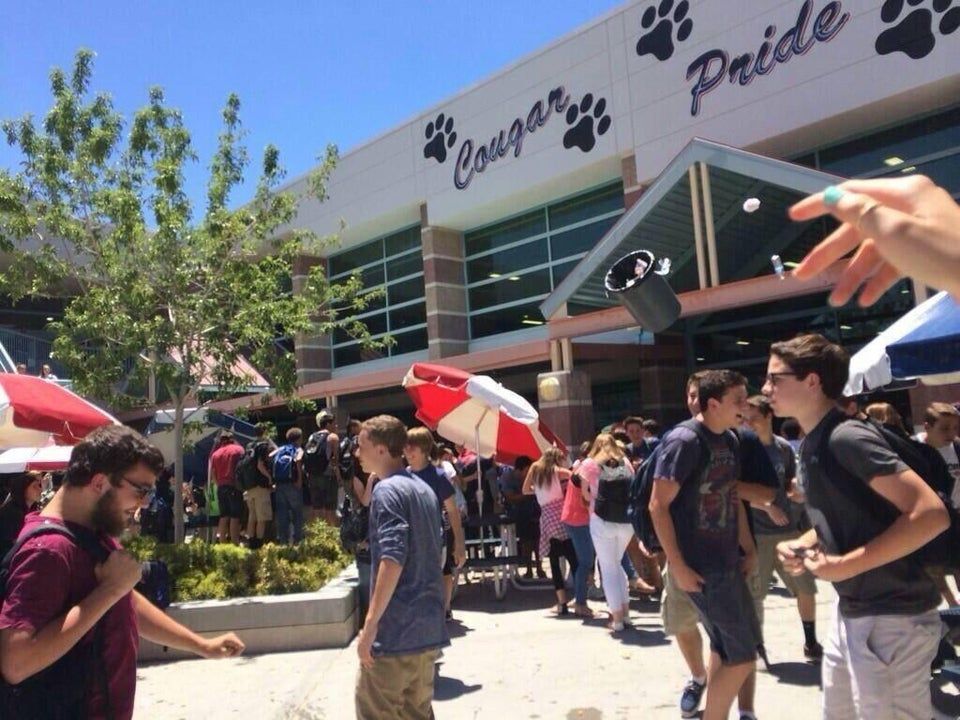 Reddit | ShadowConspiracy
In my high school, if someone was throwing a bin, odds are there was a kid in it or they were throwing it specifically at someone, not to try and start a food fight. However, I love the “calm before the storm” aesthetic of this picture, there’s something quite serene about a bin in flight here.

9. When The Paella Falls, We All Fall! 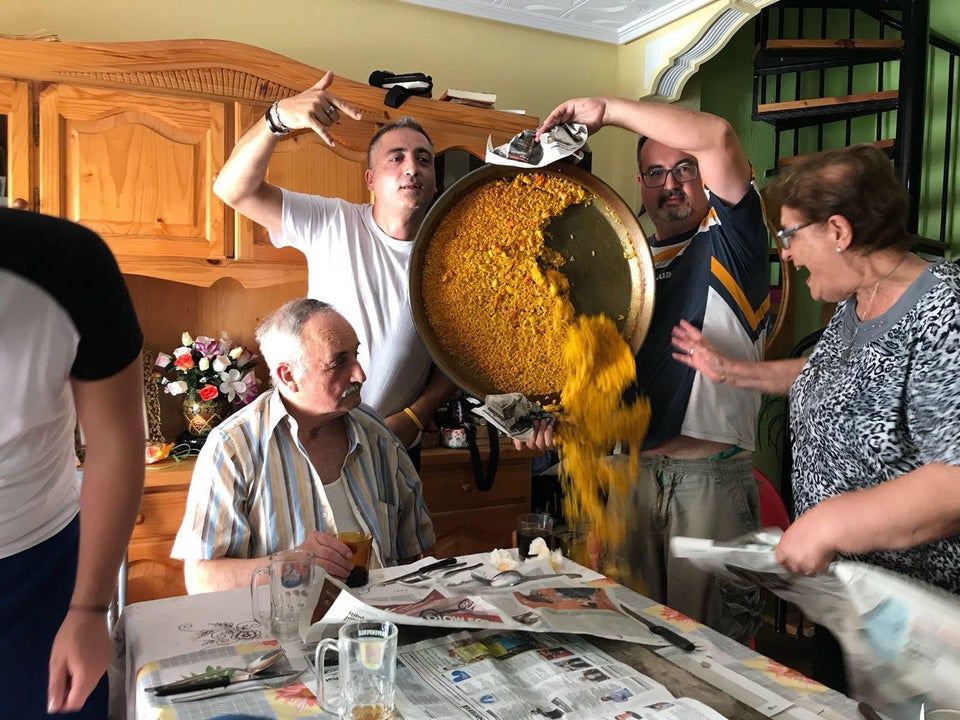 Reddit | Dusty_Machine
This photo captures so many stages of the human condition. The two at the back representing hubris, the woman on the right experiencing shock, rage and grief all at once, and the man sat at the table exhibiting the most important emotion, apathy. So long as he’s drinking that wine, he doesn’t care one bit. 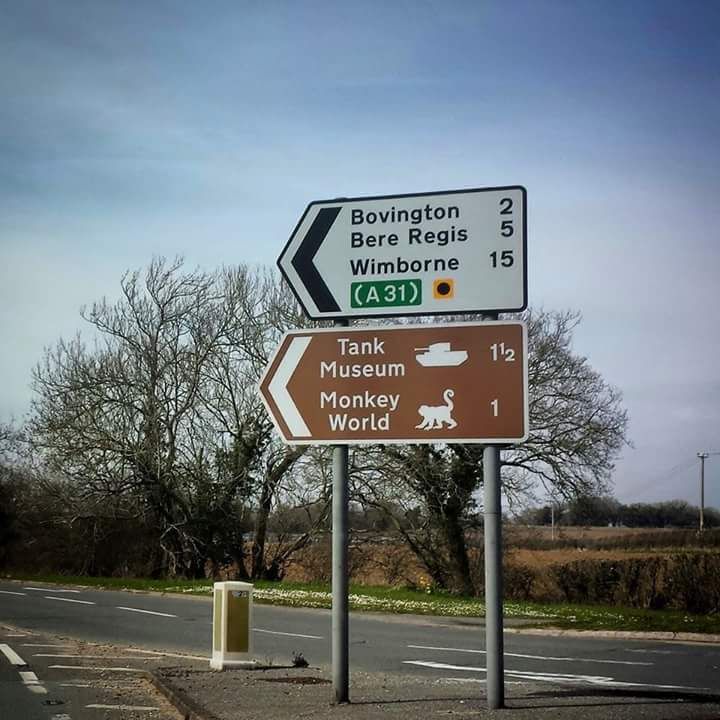 Imgur
Somewhere, Andy Serkis is already writing the script of whatever disaster is inevitably going to happen here. 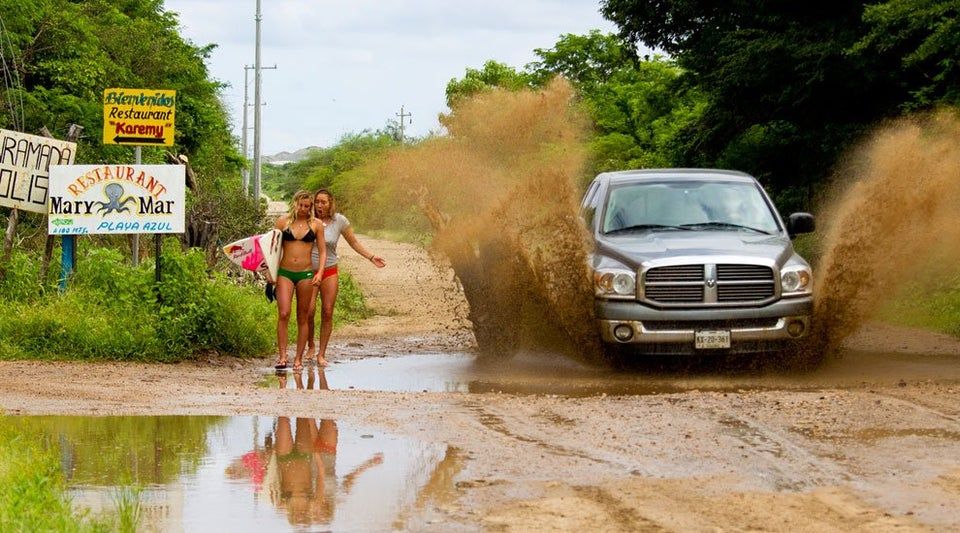 Reddit | bagelbunny
This is not the sort of wave that they were hoping to catch. Bit of a jerk move from the person driving that car as well, the only time that it is acceptable to do this to someone is if they’re riding a bike.

12. “Friend/coworker set her hair on fire while blowing out the candles on her birthday cake. Taken the split second before anybody realized.” 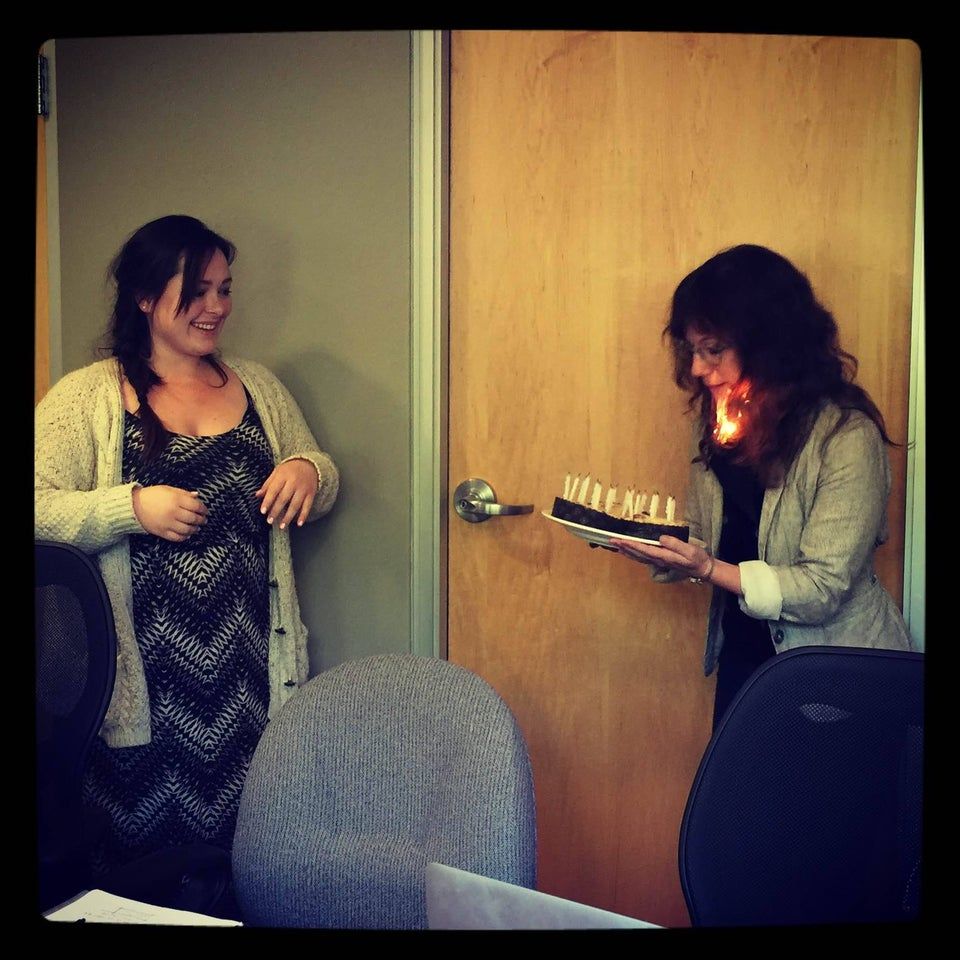 Reddit | MURPHtheSURF
The person who posted the photo explained that her friend was totally fine in case people were worried! 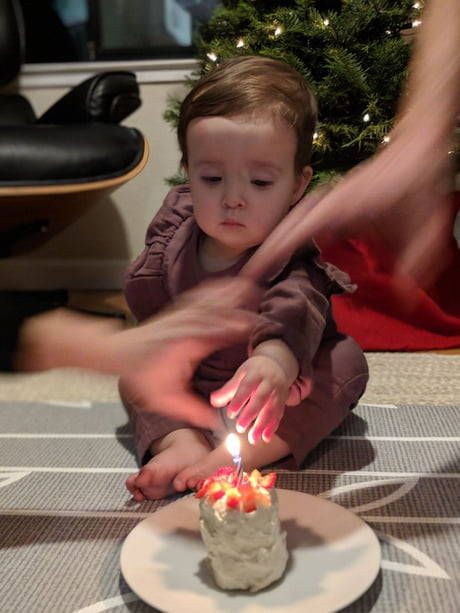 Reddit | stormRed1236
That kid has no fear in it’s eyes. It started into the heart of the flame, and the flame spoke to it. 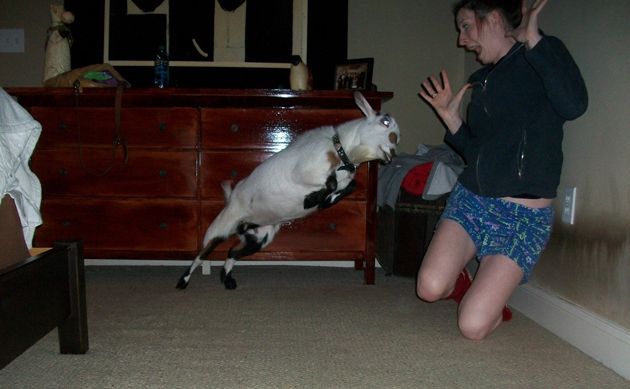 Reddit | diogosavoldi
I imagine that you may have the question, “Why is there a goat in their bedroom?” Well, I do not have the answer, and quite frankly, I don’t fancy Googling that sort of thing to try and find the backstory. If you’re planning on it, make sure safe search is on!

15. “A few years ago, my backyard BBQ ended up in disaster… at least Google street-view was there to take photos”

Reddit | picz
Hey Google, tell me how to put out a BBQ fire as fast as possible! 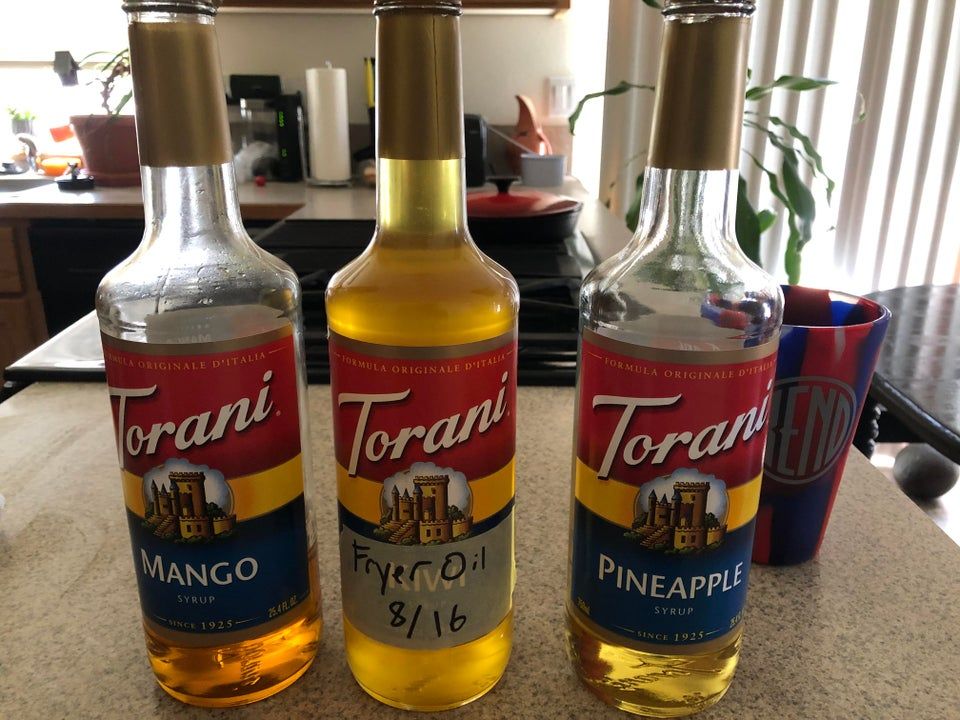 Reddit | badmotivator11
Mmm, this mango cocktail has a very distinct taste, on a completely unrelated note, does anyone want to order some chips? 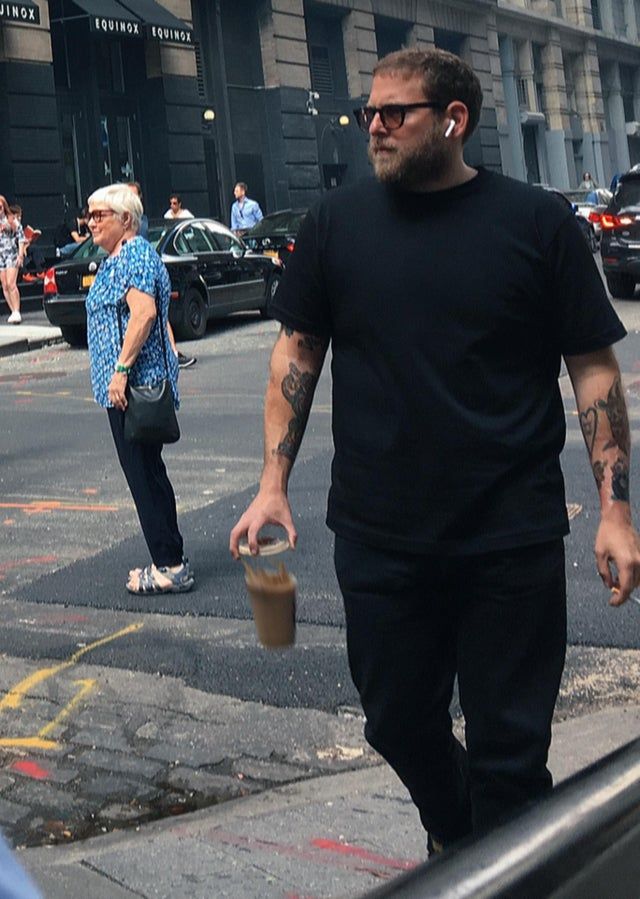 Nothing worse than when someone gets a goofy picture of you when you’re trying so hard to look cool. All in black, the tattoos, the beard, the shades, and yet all anyone is looking at is the damn cup about to ruin his day.

Imgur
Much like most good dogs, this one probably just shook it off, picked up the evil flying disk and went back to his human for more.

Imgur
You may think that there’s no way your kid could get hurt watching you put Mentos in diet soda, but they will find a way.